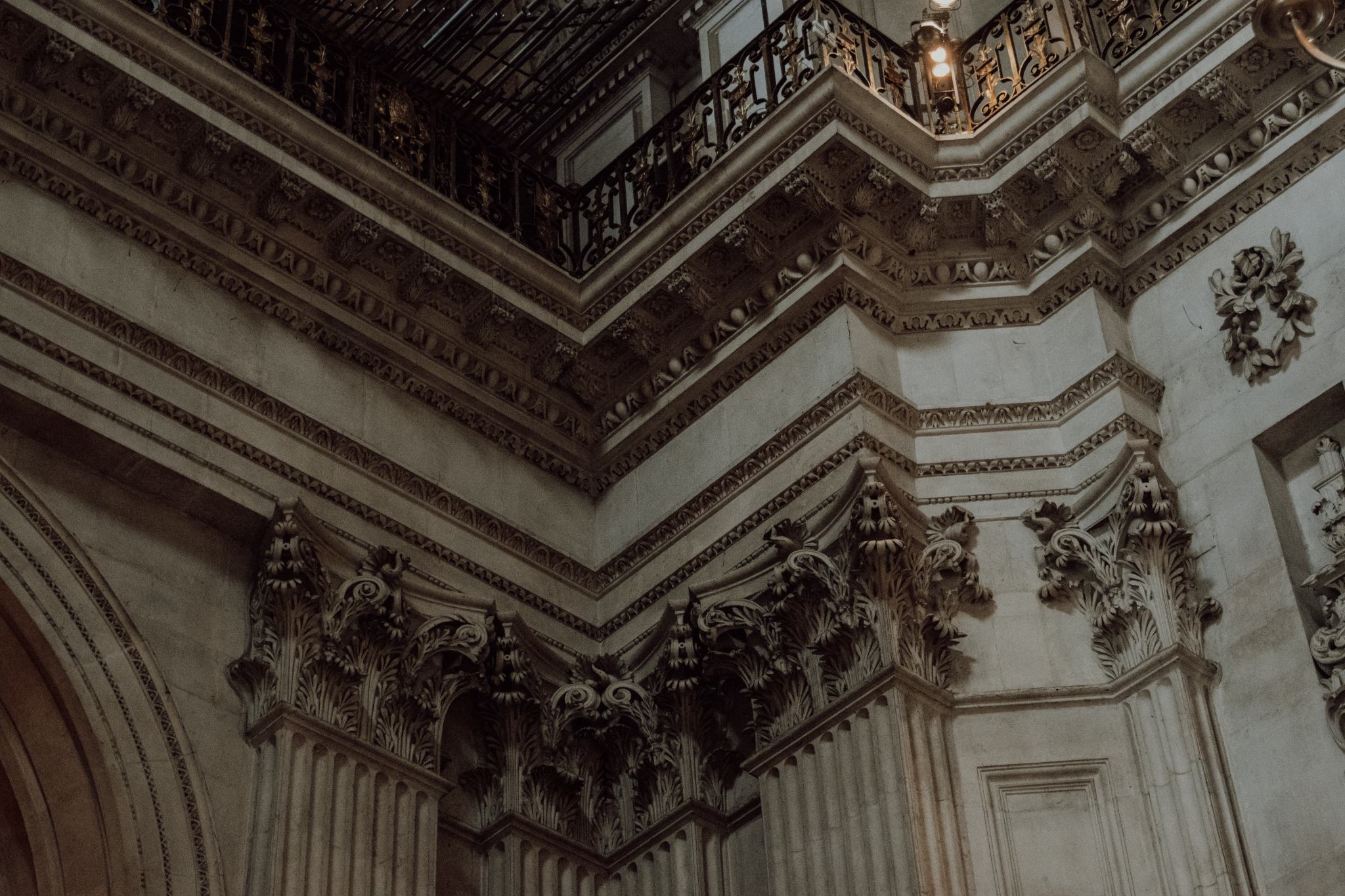 Let me first begin by saying this – the structure that you’ve come to know as St Paul’s Cathedral hasn’t existed since the consecration of this place in 604 AD. In fact, if it had, I would be amazed. The cathedral you see today is the work of the late Sir Cristopher Wren, built in the late 17th century. In my opinion, it’s one of the most beautiful examples of English baroque architecture that you can see in the UK today, second only in size to the Liverpool Cathedral in the north.

But let’s backtrack for a second here.

When I was younger and just beginning to travel, my parents and I went to Paris on a trip for my sixteenth birthday. We went for nearly two weeks, and I remember being mesmerized at every turn – the architecture, the history, let’s be honest – the FOOD (!!!) and even the churches. Although by the end of the trip, and my mother will never let me live this down, I said, “Are we going to ever see anything other than churches and dead people?” For example, going into the crypts and the catacombs too.

Well mum, it’s safe to say that I understand the desire to see all of the churches now.

The History of St. Paul’s Cathedral

Cathedrals, as we all know, conceal a great deal of history within their walls. But how much do people in the modern century really know about St. Paul’s?

Like I said before, the cathedral known as St. Paul’s that you see now, is not how the site always looked. Not even close. In fact, the first wooden church dedicated to St Paul’s was built by Mellitus, Bishop of the East Saxons. The initial structure’s construction began after the site’s consecration in 604. This church burned down in 675 and was rebuilt shortly after.

When I think about this version of the church, I tend to lean towards the version of wooden churches that you see frequently in shows like The Last Kingdom, Vikings and The Cathedral by the Sea. Perhaps this means I watch too much historical fiction – though with the last year, I think we’ve all had a bit too much time on our hands.

You may be thinking – wait! What about the second one? I thought the same when I was speaking to some of the tour guides at the cathedral this past October. In fact, they often pass by most of that portion of the cathedral’s history, as the building itself the second time around looked very similar to the first wooden church that stood on the site. The part of the story they don’t pass by? Well, if you’re familiar with the term Dane Law – more specifically, the time in English history when the Vikings of Scandinavia were raiding destroying much of the anglo-saxon territory and cities. The second St. Paul’s met its destruction at their hands – leading to a much more permanent structure the next time it was rebuilt.

The third version of St. Paul’s Cathedral was built in 962 A.D., and this is when the church was finally built in stone.

Enter stage right, the Normans. The term ‘Normans’ is thought to derive from “North Men” or “Normandy Men”. After more destruction due to a fire occurred to the third version of the church, the Normans, who are determined to create the longest and tallest Christian church in the world, rebuild St. Paul’s. This gothic stone cathedral is finished in 1240, and in my opinion, looks most like the current cathedrals in York and Lincoln. Each having a great amount of Norman influence as well.

After standing for five centuries, the fourth St Paul’s is destroyed in the Great Fire of London in 1666. Burning for four days, the fire destroyed 13,200 houses and 87 parish churches. And yet, this could be considered a miracle, fewer than 20 people lost their lives.

In 1668 Christopher Wren, an up-and-coming architect, is hired to rebuild St Paul’s after the fire. Many different designs and plans for the new Cathedral were submitted, with plenty of back and forth, before he was finally given the go-ahead.

Before the new cathedral was finished, a service of thanksgiving was held in the quire to celebrate the the end of the war between England and France. The service was held in 1697, however, the domed cathedral was declared complete in 1711 by parliament, becoming the iconic structure that we all know today.

Reasons to Visit the Cathedral

When I was younger, I used to think that one grand church per trip was enough. And like I said before, now I find myself going into more and more with every trip I take. St. Paul’s Cathedral is such a beautiful building, one that you can see each addition as it blends with the structure already in place. But, if you’d like a few more reasons to visit, I think I can oblige.

Aside from the jaw-dropping view you see from the moment you step into the cathedral, the three galleries on the upper floors are my favourite part of stopping here. Nearly 600 steps all the way to the top, it’ll be your cardio activity for the day, but well worth being out of breath at the end of your climb. The three galleries are the Whispering Gallery, the Stone Gallery and the Golden Gallery at the top.

During my last trip to London in October, the Whispering Gallery was closed – but having been into this level of the cathedral before, I can guarantee that it’s worth the 200(ish) steps up. Rumor has it, it was designed for a king to flirt with the wives of married men. But in truth, you can whisper a secret against the wall to someone across the room. And yes, they will be able to hear you – almost like you were standing behind them.

The Stone and Golden galleries are the two galleries that are actually outside of the cathedral itself – if I were you, I’d go on a clear but slightly chilly day. Reason being, as you work up a sweat on the way up, the crisp air will be a glorious feeling. And let me tell you, the views simply can’t be beat. 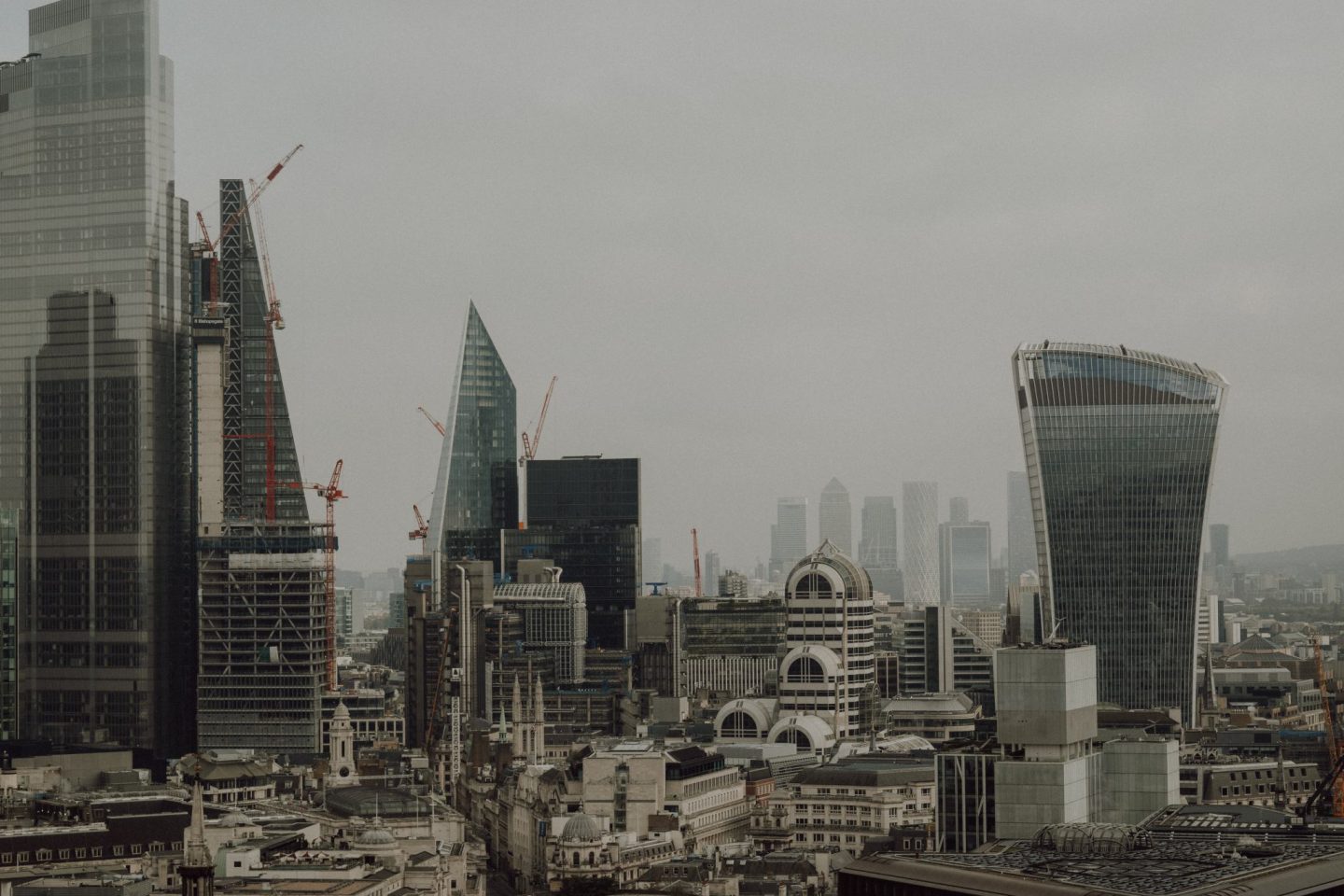 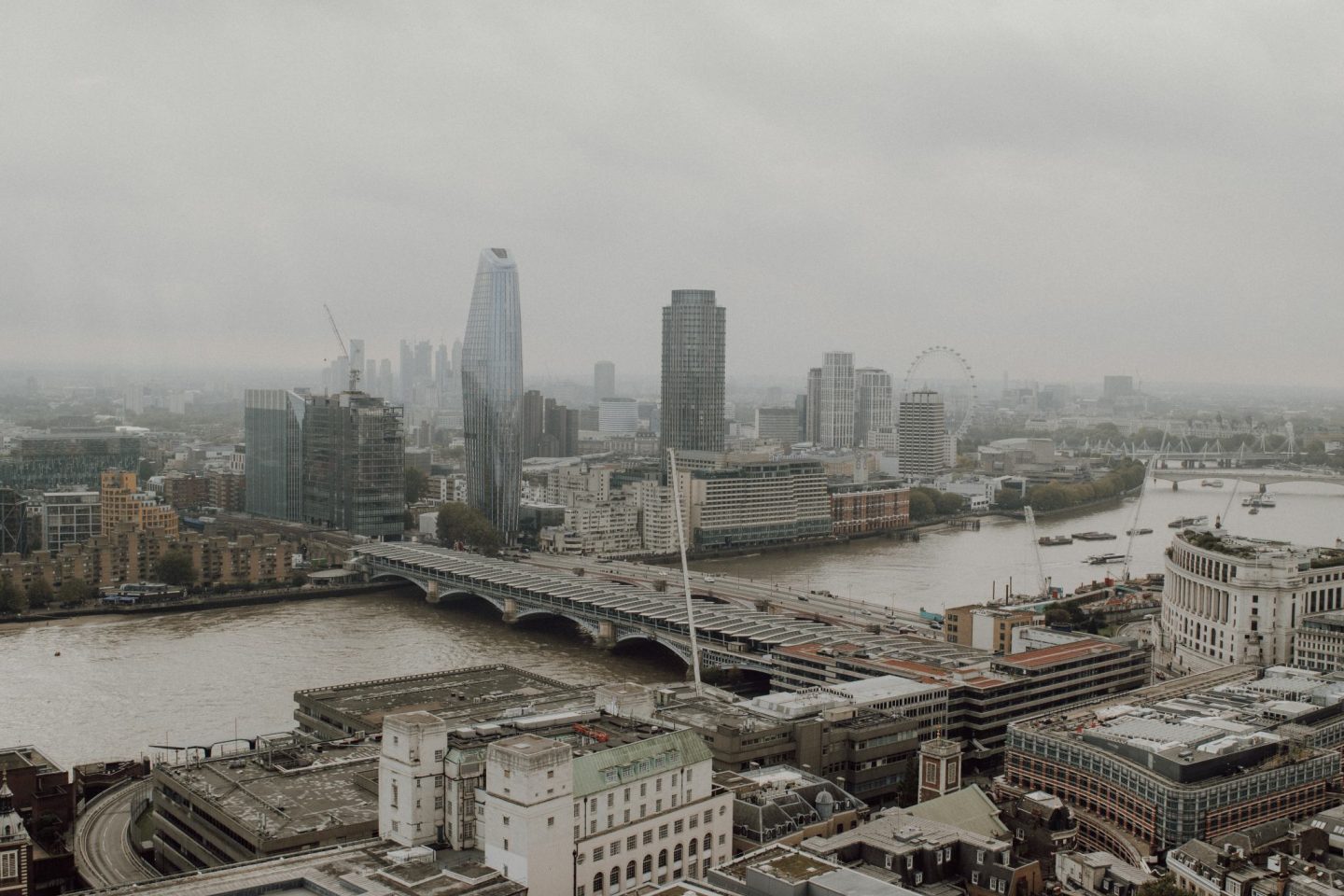 Having been starved to death in captivity after his overthrow by Henry IV, King Richard II’s body is put on display in St Paul’s. Richard’s reign ended in his abdication – but in all fairness, he may have been introduced to the head of the monarchy earlier than he should have been. It could have been part of the explanation of why his rule was thought to be a bit chaotic.

Richard of Bordeaux (King Richard II), was King of England from 1377 until he was deposed, abdicating the throne in 1399. Richard’s father, Edward, Prince of Wales, died in 1376, leaving Richard as heir apparent to his grandfather, King Edward III. When his grandfather died, the 10-year-old Richard succeeded to the throne.

If you ask me, no one at ten years old should ever be king. But times were certainly different then.

Following his death in France, great warrior king, Henry V’s body lies in state at St Paul’s. Henry is known and celebrated as one of the greatest warrior kings of medieval England, also known in history as Henry of Monmouth. He led two successful invasions of France, bringing his outnumbered troops to victory at the Battle of Agincourt in 1415 and eventually securing full control of the French throne – leading to future English kings’ claim of being rulers of both England and France.

After his death in captivity at the Tower of London, King Henry VI’s body is displayed at St Paul’s. He is buried at Chertsey Abbey, before later being re-interred in Windsor. Henry VI is most well known for being a sort of social recluse – pious and studious, he rarely appeared as the strong leader of government that the English monarchy required. This unstable version of government is actually part of the cause of the War of the Roses – the famous long-lasting dispute of blood claim to the English throne between the House of Lancaster and the House of York.

Heir to the English throne, Prince Arthur, marries Catherine of Aragon at St Paul’s. Arthur dies before becoming king and Katherine goes on to marry his younger brother, the future King Henry VIII. This is actually soon before Catholicism begins to lose favour in England. The reign of King Henry VIII was the beginning of the end for many aspects of the religious life of the building associated with Roman Catholicism. The shrine of St. Erkenwald was plundered and destroyed, followed by waves of iconoclasm in which shrines and images were destroyed, walls were scrubbed clean of colour and all resemblance of Catholicism was all but purged from cathedrals and religious buildings all around the country. The full suppression of Catholic worship and fittings was carried out under Edward VI, Henry VIII’s son by Jane Seymore, and by the first Protestant Bishop of London, Nicholas Ridley, who was martyred by Mary I’s (Bloody Mary) government in 1555.

In a ceremony that was watched by millions of people, all around the world, Prince Charles married Lady Diana Spencer at St Paul’s Cathedral in 1981. It was the first wedding of an heir to the throne in St. Paul’s Cathedral for 480 years, since the marriage of Prince Arthur to Catherine of Aragon in 1501. Perhaps it was superstition, or maybe Westminster Abbey was thought to be a better venue. The true reason, we may never know.

Though I’ve already touched on the views from outside the cathedral, the views inside are almost as – if not more – spectacular. Mosaics inlaid with gold leaf adorn the ceilings of every part of the structure, so intricate and almost look like they’re lit from within when the sun hits them just right.

The shrines and monuments within the cathedral are absolutely breathtaking – some taking longer to build than even the cathedral itself, if you can believe it. 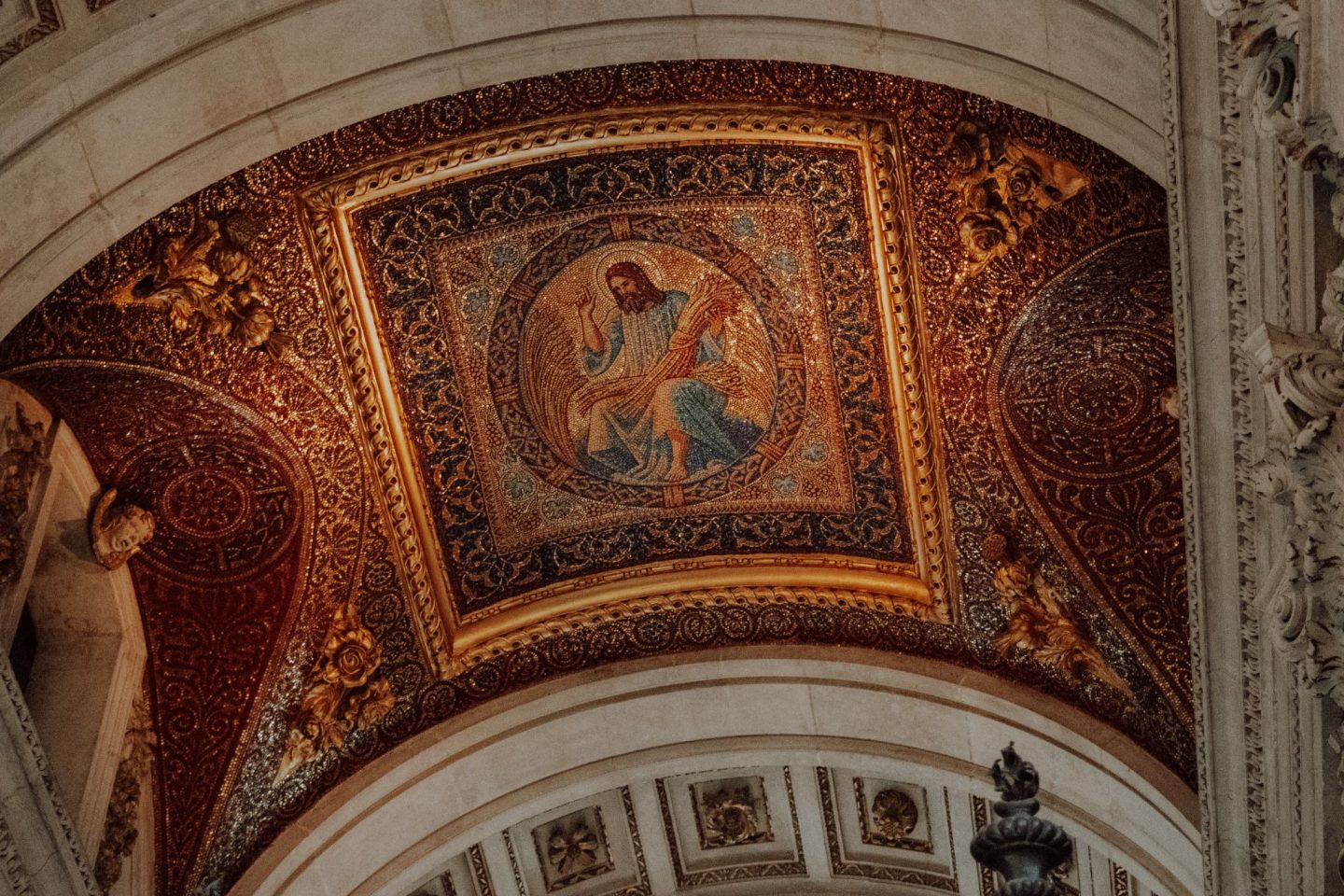 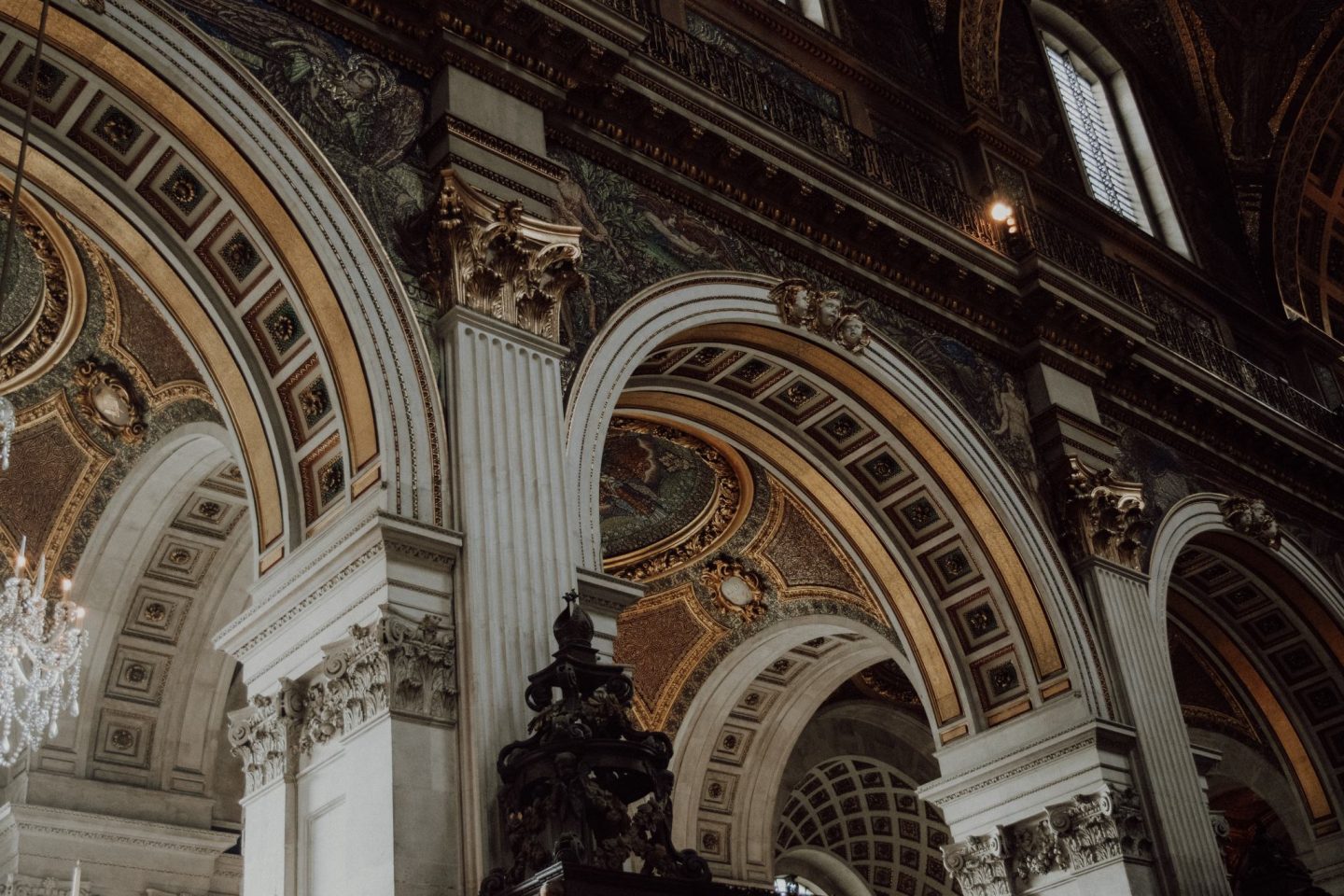 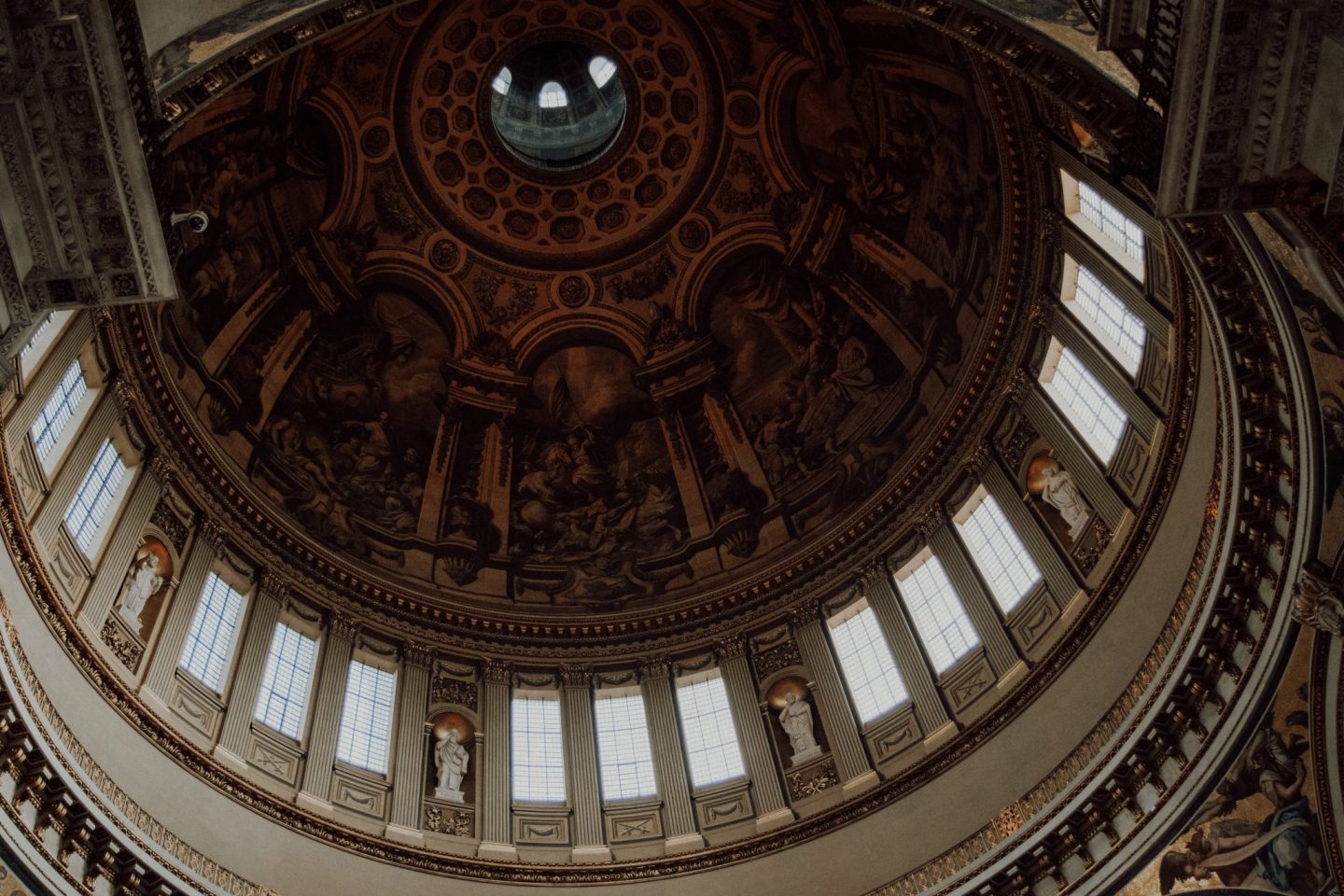 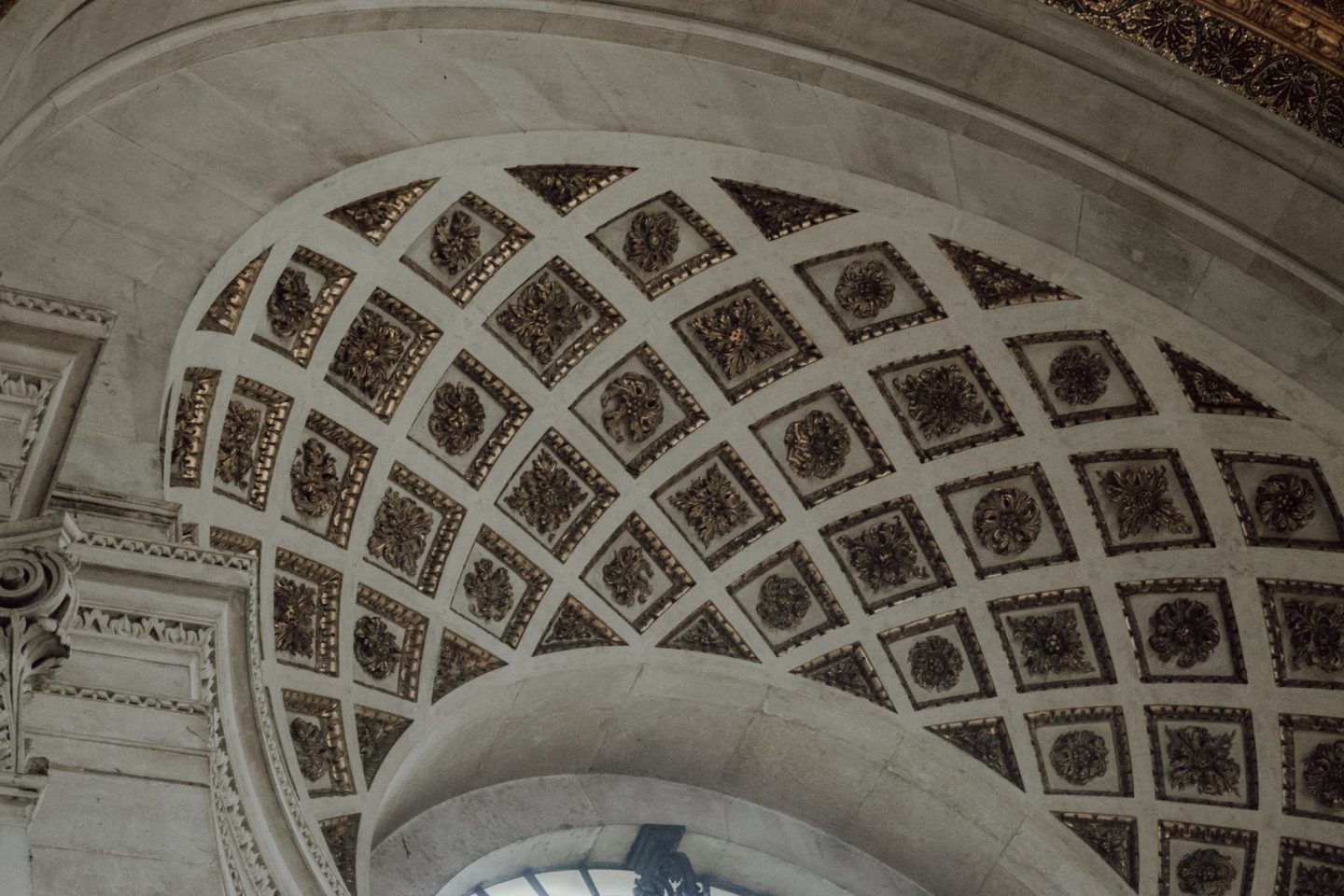 Be a Piece of History

This is the oldest worship site in England – perhaps even in the UK. Worship on this consecrated site dates back to 604 A.D., and still the Eucharistic celebrations continue to this day. So whilst this is a beautiful piece of art, a stunning architectural feat and one of the most visited cathedrals in the world, it still is a functioning church that many congregate in for support and faithful worship.

Whether you’re religious or not, being a part of the history of this building is a moving feeling – from the shrines of veterans to celebrating the eucharist, there’s something here that most people will be able to appreciate and enjoy.

For that, I think St. Paul’s Cathedral is worth the visit at least once in your life.